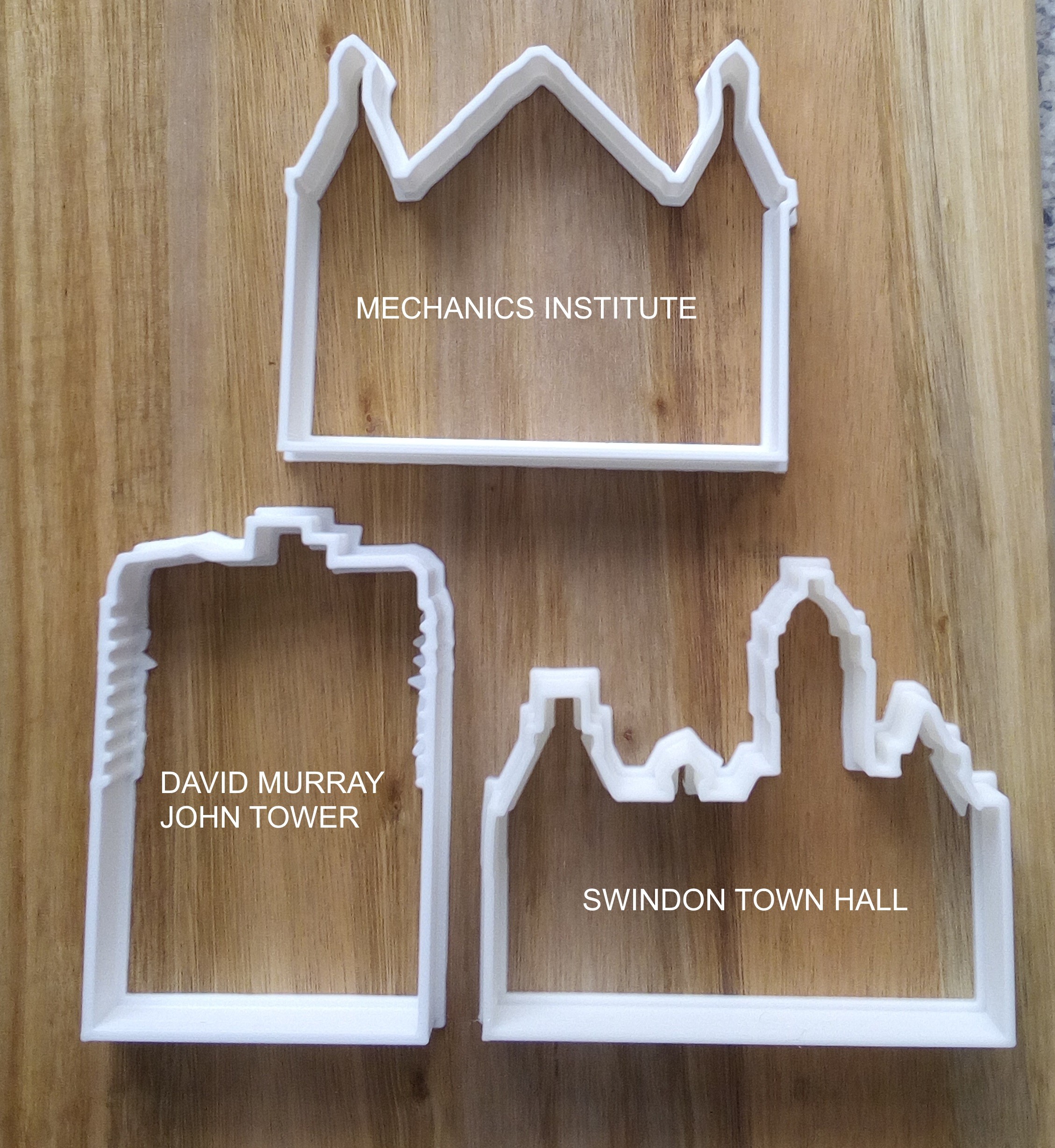 The reason for the request? In different guise, as blogger Born again Swindonian, Angela has written a local history book, Secret Swindon. She had the idea of serving biscuits at the book launch in the shape of Swindon buildings mentioned in the book.

After some experimentation, some things worked better than others, we succeeded in producing cookie cutters in the form of:

These Swindon-themed biscuit cutters are available to buy from Swindon Central Library in the library shop. So, if you fancy dunking the David Murray John Tower, licking the Locarno or munching the Mechanics’ Institute pop along and bag yourself some.

Now the home of Swindon Dance, New Swindon’s town hall, designed by Quaker architect Brightwen Binyon, had its foundation stone laid in 1890. The Marquess of Bath declared it open in 1891. Similar to neo-17th Century Dutch architecture it’s two storeys high. The building boasts a ninety-foot clock tower above its west front. Beneath that the main entrance porch faces Regent Street.

The building’s intention was to be a centrepiece for New Swindon. The two Swindons, old and new, didn’t become one town until 1900. The last town charter signed by Queen Victoria. Powers were though transferred from the Old Swindon town hall in 1891.

The Mechanics’ Institution – in this photo circa 1938

Workers based in Swindon’s Great Western Railway Works paid for this building by subscription. The GWR allowed them the land at a peppercorn rent but that was the extent of their involvement.

Edward Roberts designed and constructed the building, with completion coming in 1855. Quaker architect Brightwen Binyon (who built several buildings in Swindon including New Swindon’s Town Hall) extended it in 1882-83.

It contained the UK’s first lending library and was the cradle of the GWR Medical Fund Society.

I’m rather pleased by the idea that, with modern technology, we’ve created a 3D outline of a building whose users created the greatest railway ever. Those men were skilled and thirsty for knowledge. We like to think that they’d have been intrigued and impressed by 3D printing and the opportunities it affords.

As well as in her book, Angela has written at length about this building on her blog, so if you want to know more about it the best thing to do is to read that: http://swindonian.me/2017/08/19/david-murray-john-tower/

She’s also written other Swindon-related books and you can find information on them here.

Though 1848 saw the made to build a market hall in Old Swindon it didn’t happen until 1852. At that point the Swindon Market Company came into being to oversee its construction.

In 1865, the Lord of the Manor of Old Swindon, Ambrose Goddard, provided land next to the town hall for a Corn Exchange. Abutting the town hall, this add-on featured an 80 ft tower and a triangular market hall covered by a glass dome.

By 1880 the large hall in the Corn Exchange had become a theatre. In the run up to WWI it became an ice rink before finding a new life as a cinema in 1919.

By 1949 the building had become the Locarno Dance Hall where many Swindonians saw bands on the circuit later to make it big. Such names as The Kinks, The Animals, the Yardbirds, and Brian Poole and the Tremeloes – they all appeared there.

If you’re in Swindon, the brilliant Library Shop within the Swindon Central Library, exclusively stocks our Swindon buildings cookie cutters. Until next time, enjoy eating a piece of Swindon!

Any questions about anything we do? Don’t hesitate to get in touch!