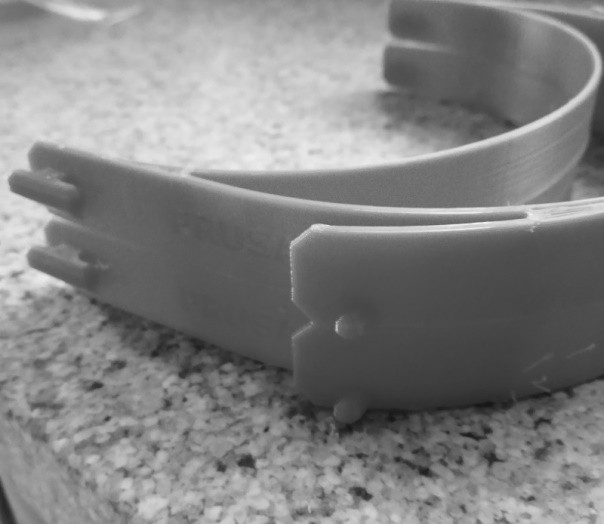 Well! The world of SED Developments has been a somewhat different one, both before and during the period when we published our last blog on the topic of the future of 3D printing. It’s not so much that we haven’t been doing our usual cookie cutter printing activity but that we’ve also been part of the push to produce PPE for the NHS and care home sector.

Although we know in our heads, that a pandemic, or even a localised county-wide outbreak, of a known disease can occur at any time, the arrival of Covid-19 has blindsided all of us. Being too young to remember the whooping cough (or pertussis to give it its proper name) outbreak of the mid-to late 1970s, Coronavirus is my first encounter with mass illness. And it’s scary! The SED household is vaccinated to the hilt, yet here’s a new strain of something, with no known treatment, changing life as we know it. Blimey!

It was the middle of March when the whole PPE thing wafted onto our horizon.  And y’know, when you see medical and care staff dying from doing their job … well you can’t stand by and watch that. Not when you have the means to contribute.

A company called Prusa, agreed by the Czech Public Health, had designed a face shield. As these things appeared on social media several business friends shared posts tagging SED Developments. And we began to look at how we could help.

Over the course of one weekend, SED HQ put hours of solid work into working out what we could do, how we could print and looking for suitable plastic visors. But oh gosh! What a jumble of information we had to untangle.

For a start, visors had to be 0.5mm thick peta sheet – not easy to find in small sizes. Hampering us further was that we didn’t have a laser cutter to make them smaller. Though MR SED was agitating for us to get one! Hmmm.

We carried on digging around and came across a Facebook group called NHS 3D Printed Face Shields. They looked to be well co-ordinated and only wanted the 3D printed frames. Phew! At last we’d found a way to help. Now all we needed to do was get the correct material. We print in food safe PLA and the frames needed PETG. That’s because PETG can take higher levels of disinfection and, it’s thought, is more resistant to Covid-19.

Getting hold of PETG turned out to be a whole bunch easier to say than to do – being as everyone in the country with a 3D printer had been called, Lord Kitchener like, to arms.

Then, when we did get it, it turned to be more temperamental than our teenager. It needed adjusting to temperatures and so on and tons of technical know-how from Mr SED.

The FB group I mentioned earlier and 650 members and formed the back bone of the 3D Crowd. We joined and became part of a group of 8000 volunteers spread across the country, and split into counties – each one with a co-ordinator.

Printing the PPE then became a 12-hour day – and the odd night too. To add to our joy, we’ve got ongoing electrical problems at SED HQ. That meant we couldn’t run the washing machine and print at the same time – so we doubled up several times – if you know what I mean! With the focus on getting the PPE printed, we gave ourselves Saturday off from that to give our smalls a spin.

Before we could start the printing in earnest we had to first print a shield for ourselves. We had to wear that when handling the shields to protect them. In between prints, we had to wipe every machine down with alcohol and wear gloves to handle the frames. Once printed we bagged them up and labelled them with info on the material used, our email address and the date. Once bagged, the frames stayed bagged for three days to reduce the contamination risk. Every Saturday – wash day – a volunteer, self-funding their fuel, drove the length and breadth of Wiltshire to collect everyone’s efforts.

Once collected the frames went to Frome where a small team matched them to the acetate visors and elastics. They were then bagged again for distribution to GPs, care homes, dentists and NHS hospitals.

In total, from around sixty of us volunteers, Wiltshire donated 3,500 visors. Well done Wiltshire!

Meanwhile we soldier on until needed no more. Injection moulding is set to take over from us soon.

A county and country-wide effort

In the form of drums of material, gloves, laminating sheets, Milton fluid, alcohol cleaner, electricity and freezer bags – not to mention our time and expertise in making it happen – SED Developments has donated over £200 to this cause.  We worked solidly for eight weeks. 880 hours of printing we produced 220 visors using 11kg of material.

Multiply that by all the dozens of 3D printing enthusiasts and small business that got involved across the country and you have the 21st century equivalent of the little ships of Dunkirk in WWII.

It’s been a massive, heroic effort that’s been both staggering and cockle-warming to see and to have a hand in. We’re SOOOOO glad we became a part of it.

We’ve learnt a lot. More than we can say. Now though? It’s back to our usual business. And clean underwear!