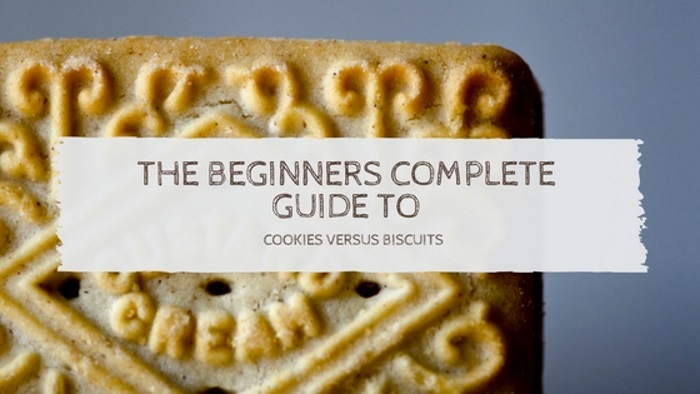 We wondered, out loud of course, why we have both cookies and biscuits in the UK. I don’t know about you, but growing up in the 70s I can’t remember eating a cookie. When did we start choosing chocolate chip cookies (as were they in the 70s –though invented in 1938 it seems) over a custard cream? I can tell you when in our house – never! With that in mind, we thought we’d do a little investigating. Yes – we know – it’s not mind-blowing stuff. But it’s at least a little bit interesting so hey – let’s see how this cookie crumbles.

I love a biscuit. And I’ll be straight up and tell you that my absolute favourite is a custard cream. Since I was small, I’ve loved custard creams. Which is odd because I hate custard, and anything that contains it! But to my joy, (and I digress greatly here), the original Custard Cream painting on the right, is by Hannah Dosanjh. And the image is available in all formats (T-Shirts, phone covers, canvas prints etc), through Redbubble.com.I may well be purchasing a mug with the custard cream on to dunk said custard cream into!

According to this history of biscuits, my beloved custard cream came into being in 1908 with the bourbon bikky coming hot on its heels in 1910. I appear to be in good company though. According to this BBC online article from 2007, nine out of ten people named the custard cream as their favourite biscuit. As the article points out, ‘there’s a lot to be said for a no-nonsense nibble!’

But I digress, again!

Both the cookie and the biscuit contain flour, after which the similarities dissipate! Biscuits in Britain are usually the dunkable type! Covered in chocolate, with currants in or even a creamy bit in the middle. 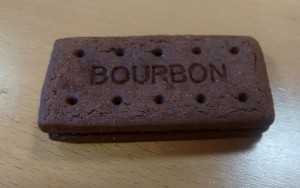 According to Wikepedia, an old French word bescuit comes from the Latin words bis (twice) and coquere, coctus ( to cook, cooked). So we get twice-cooked because biscuits were once made in two-fold process: first baked and then dried out in a slow oven. The term came into English in the 14th century and became the Middle English word bisquite. It’s easy now to see how that mutated into biscuit. Although our British biscuits are not usually twice baked, they do have a hard, dry, crunchy texture to them. Originally they were called small, unleavened cakes. Now, when I read that, biscuits don’t sound appealing at all!

In the US a biscuit is often topped with bacon & eggs for breakfast or with chicken for tea. The American biscuit is more like a British scone. 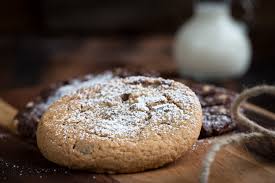 Turning to cookies now. In around 1703 the Dutch language adopted the word koekje – meaning little cake. The difference between this word and the Latin origin is that a cake rises during baking. But a biscuit has no raising agent so doesn’t, in general, rise. Gingerbread being an exception. Koekje started life as a test for the oven temperature when baking a cake. Cooks would use a small batch of cake batter, on the base of the oven, to check the temperature. And hey presto: the cookie was born.

The Dutch Koekje, trans morphed into cookie when continental Europeans began emigrating to North America and the two words with their ‘same but different’ meanings clashed. Then the words cookie or cracker became the words of choice to mean a hard, baked product.

In the UK then, a cookie is big and squishy, even a little bit chewy. However, in America, a cookie is the same as in the UK (chewy, squishy etc) although it can be a biscuit similar to the UK biscuit. Confused? You will be!

The first cookie recipe to hit the UK was one for chocolate chip cookies, and arrived on our shores in 1956. Cookies in the UK have overtaken the little old biscuit. Whole companies have been set up to provide you with the cookie of your choice. Be it regular chocolate chip, or funky salted caramel. By nature of their size, they can take on a lot more flavour and variety, than the smaller biscuit.

British biscuits are fighting back though; the UK biscuit business is worth £2.4bn. That’s an uphill struggle as the everyday biscuit (custard cream, digestive, bourbon etc.) is losing favour and flavour to, not cookies, but cereal bars, luxury brand biscuits and chocolate coated biscuits. We want more handcrafted biscuits or an illusion of health. Biscuit producers are beginning to cut out the sugar, fat and salt in their products to make them healthier, and so more appealing. 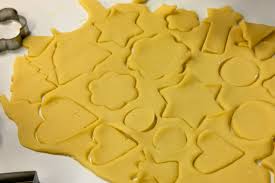 We, as producers of cookie cutters, shout yay hay! Because we can produce, in our own homes, a humble biscuit/cookie in a shape we want it to be, in hardly any time at all.

You don’t need to ice them – stick some chocolate chips in or peanut butter into the mixture for flavour. And while you’re at it, create some quick biccies for the dog as well.

To help you along, we’ve included some downloads for you, for Sweet & Savoury Biscuit Recipe and Guide Dogs for the Blind Doggy Biscuits They take the biscuit! Okay – I’m going …

There you have it a small history of the biscuit and the cookie.

Show us what you create – we’d love to see them. Check out our Instagram and Facebook pages, send us your pics and we can feature them. Until next time: #happybaking.