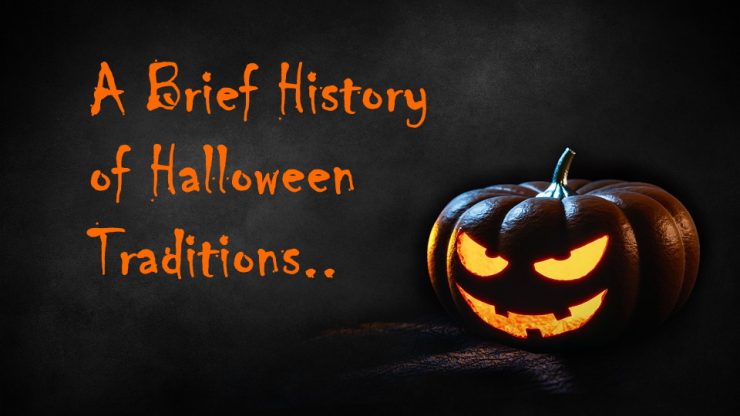 Voices whisper in the trees – tonight is Hallowe’en.

With Halloween on the horizon I reckoned we should have a peek at a brief history of Halloween traditions. Hot on Hallowe’en’s heels we’ve got Bonfire Night– so for good measure we’ll have a look at that too. After all both of them are perfect excuses for a baked goods bonanza!

So, Halloween or Hallowe’en or All Hallows’ Eve or All Saints’ Eve. Call it what you will, the first thing to get straight is this: Hallowe’en is NOT an American import.

Yep. As this blog, Trick or Treat, from AA Editorial Services points out, and as the image above illustrates, far from being an American export to US here – it’s actually an import from the British to America.  Hallowe’en didn’t become popular Stateside until the 20th century. And even then, only in small Irish Catholic settlements. Yet here in the British Isles there’s been carryings on related to this date in the calendar since … well pretty much forever to be honest.

But first – what is Hallowe’en or All Hallows’ Eve?

Well, as this BBC History blog explains, All Hallows’ Eve is the day before All Hallows’ Day or, in the Christian Calendar, All Saints’ Day. The name comes from the Old English ‘hallowed’ (as in hallowed be thy name??) meaning holy or sanctified. Hallowe’en is a contraction of All Hallows’ Eve.  But there’s a bunch more to it than that so do read the BBC blog.

Right, here goes with a brief history of Hallowe’en traditions, because, like so many things, it’s a looooong story:

In other words – the carved-out pumpkin – in the first instance a turnip.

The legend of Irish Jack or Stingy Jack came from the Irish – thus Irish migrants to America helped to popularize the Hallowe’en festival.

The story goes that a stingy drunk called Jack tricked Satan into climbing an apple tree. But then, once Satan was up the tree, Jack cut the sign of a cross in the tree trunk to stop him getting back down. Jack then made the devil swear he’d never come for Jack’s soul. With reluctance the devil agreed. But this pact backfired on Jack when he died. Thanks to his life of drunkenness and selfishness he found himself turned away from the gates of heaven and sent to Lucifer. But he, keeping his promise, turned him away too.

With no place to go, Jack was condemned to wander the earth for all eternity. As Jack left hell the devil threw a lump of burning coal at him. Happening to be eating a turnip at the time, Jack put the coal inside it. Thus, we have illuminated pumpkins – or Jack-O’-lanterns – at Hallowe’en to symbolise Jack roaming the earth in search of a resting place.

Trick or Treat and dressing up

Unfairly maligned as an unwelcome American import, this too has its origins close to home.

There existed in Great Britain and Ireland (possibly still does) a tradition of going from door to door for food, known as ‘Souling’. This practice involved children and the poor singing praying for the dead in return for cakes.

Also, on the other side of Hadrian’s Wall, there’s a practise known as ‘guising’ (think about the word ‘disguise’) where children disguised in costumes go from door to door for food and coins.

There is though one part of all this that does come from the USA and that’s the custom of saying ‘Trick or Treat’. It’s thought that this dates from the 1930s – though that’s an approximation – as an antidote to increasingly rowdy Hallowe’en pranks. Someone had the bright idea that it provided a healthier activity for the young and encouraged them NOT to play tricks. If nothing else it’s a great commercial opportunity for makers of confectionary the world over.

Hallowe’en traditions in a nutshell:

It’s interesting though that while we go for the full-on spook-fest, the American Hallowe’en is very much general fancy dress and a much homelier affair than ours.

So! If you’re planning a Hallowe’en party with plates full of Spooktacular baked goods to get your fangs into, why not buy now from our Hallowe’en collection? More Halloween ideas in our blog from last year, and embrace Halloween Traditions and new ideas.

Remember, Remember the 5th of November

Remember, remember the fifth of November,

We see no reason

Should ever be forgot!

To blow up the king and parliament.

Each and every year, on and around the 5th November we light bonfires and let off fireworks on bonfire night. Or Guy Fawke’s night or even, simply, Firework’s Night. And does anyone still make a Guy to put on the bonfire? Let alone go door-to-door with a Guy in a wheelbarrow or old pushchair asking for ‘a penny for the Guy?’

The tradition of Guy Fawkes-related bonfires began in the same year as the failed gunpowder plot – foiled during the night between the 4th and 5th November in 1605. By the daytime of the 5th, Londoners, knowing only that the King wasn’t killed, lit bonfires to give thanks. And we’re still doing it today. The custom of burning the effigy of Guy didn’t start until around the 19th century.

But who was Guy Fawkes and why do we commemorate, using bonfires and fireworks and effigies, what he and his fellow conspirators tried to do with their gunpowder plot?

Remembered for: Conspiring, together with 12 other men, against James I and VI and planning to blow up the House of Lords.

Family: Fawke’s father worked for the Church of England. But when he died, Fawke’s mother remarried – to a Catholic. Fawkes became influenced by his stepfather’s Catholic practices and, despite it being against the law during Elizabeth I reign, converted to Catholicism as a teenager.

In 1604, Fawkes went to Flanders to fight for the Spanish. There he met Thomas Wintour – another cross Catholic. He persuaded Fawkes to join a group of conspirators in a plot to assassinate the king. For 18 months, Fawkes and 12 others calculated a plan to blow up the House of Lords, kill the king, and replace him with a Catholic alternative. To achieve that, the group got thirty-six barrels of gunpowder to the cellar underneath parliament. They planned to set it alight when James I opened parliament on 5 November 1605.

Cutting the rest of the story short: Robert Cecil, dedicated minister to the king, found Fawkes guarding the gunpowder. Fawkes was arrested, tortured and horribly executed.

So, what you’re celebrating, when you wave your sparklers around on bonfire night, is the failure of that Catholic plot to bring down the king and the government.
And that’s why gunpowder, treason and plot should never be forgot!

And don’t forget to bake your way through this celebration – if that’s the right word for it!! Hope you enjoyed our whizz through Halloween Traditions, find out more about us and our 3D Printing/Baking, on Instagram and Facebook.

seddevelopments
•
Follow
What we working on? Well we're looking at St Andrew's Day which is 30 November and thinking Thistles, Scottie Dogs & Highland Cows.🐶To be honest the Thistle Stamp is from last year & we're adding the Tartan pattern along with the Highland Cow and Scottie Dog to match. Must admit I do love working on the annual holidays, thinking of more bizarre ways to celebrate!! 😁🧐
View on Instagram |
11/12