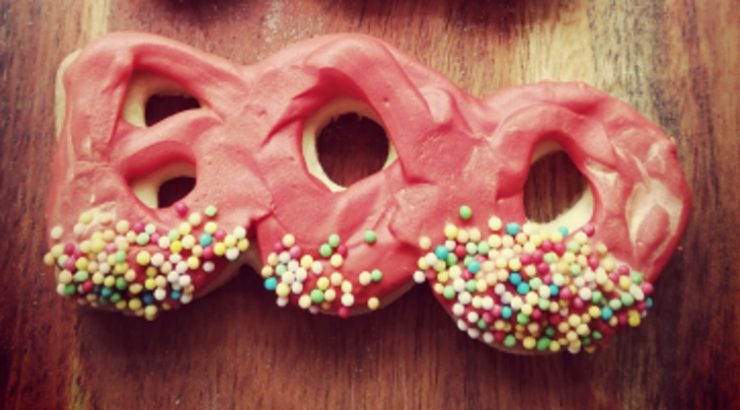 The end of 2020 is nigh now. And oh my what a year it’s been! When I wrote Cookie Crumbles into the End of the Year around this time in 2019, I, like the rest of you, had no idea of the Covid-shaped juggernaut coming our way. Thus, while this post is, for the most part, our traditional poke-fun-at-our-frightful-icing-fails we’ll also look back at our involvement in the production of PPE. Indeed, we’ll start with that before moving on to the silly stuff.

As we wrote in September of this year, in our blog about SED and PPE, 2020 has seen still seen us busy as ever with our usual cookie cutter designing and printing activity. If there’s a festival then have we made a cookie cutter for it right? Y’better believe it! Plus of course the ad-hoc bespoke work we do – bushes for fishing rods for example.

But this year … well! We also were involved with 3D printing community’s efforts to print PPE for care homes and the NHS. Of course, as soon as we heard about this we wanted to get involved. But jeepers – how? What was the best way forward? Well – as we described in our blog:

Over the course of one weekend, SED HQ put hours of solid work into working out what we could do, how we could print and looking for suitable plastic visors. But oh gosh! What a jumble of information we had to untangle.

For a start, visors had to be 0.5mm thick peta sheet – not easy to find in small sizes. Hampering us further was that we didn’t have a laser cutter to make them smaller. Though MR SED was agitating for us to get one! Hmmm.

We carried on digging around and came across a Facebook group called NHS 3D Printed Face Shields. They looked to be well co-ordinated and only wanted the 3D printed frames. Phew! At last we’d found a way to help. Now all we needed to do was get the correct material. We print in food safe PLA and the frames needed PETG … ‘

All that sorted, we were up and printing and so proud to be part of a countrywide effort to get the PPE to those that needed it most.

It was a massive, heroic effort and I can’t tell you how glad we are that we played a part in it. So that was the biiiiiig thing of 2020 – but now it’s time for SED HQ – the Denis Norden (Google him) of the icing world to bring you … drum roll please …and going broadly through the seasons:

Carrots: We know – no self-respecting allotment owner would want to show these specimens off. Nor would Peter Rabbit risk life and skin for them!

Leeks and Daffodils: if you’re Welsh look away now. Ein hymddiheuriadau The daffs would hardly stir Wordsworth to literary heights either.

Rabbit Head: don’t show this to small children. its the stuff of nightmares, We’ve managed to make this baked bunny look like its go myxomatosis Eeek!

The Man Cake: Yes well, moving on with all the swiftness our middle-aged ones can muster…

Boo Hmmm – terrifying aren’t they? but for all the wrong reasons…

Car with ‘tree’ on top – well – you can just about tell that its a baked-good car. But the tree? Well if we’re honest it looks rather like someone did a rather violent sneeze on it!

Santa head down in the chimney – yes well if you saw the sorry state of our icing efforts he’d no doubt decide to stay stuck. Who could blame him?

To soothe your jangled nerves after that fright-fest here’s a photo of how it should be done. Icing by @effiespantryscakes – cutters designed by us.

So there you have it our 8 frightful icing fials of 2020. We trust you;re not tooscarred by teh experience

Wishing you all the best Christmas you can have in whatever circumstances you have – and hoping for a better new year for everyone – everywhere.

seddevelopments
•
Follow
What we working on? Well we're looking at St Andrew's Day which is 30 November and thinking Thistles, Scottie Dogs & Highland Cows.🐶To be honest the Thistle Stamp is from last year & we're adding the Tartan pattern along with the Highland Cow and Scottie Dog to match. Must admit I do love working on the annual holidays, thinking of more bizarre ways to celebrate!! 😁🧐
View on Instagram |
11/12